Soprano‘s album “Chasseur d’étoiles” (ie. “Star Hunter”) is out today. It contains some duets including “Le grand bleu” (ie. “The big blue”) with MC Solaar to which Soprano is very attached.

It’s a crazy thing. And there, I had the right concept, the right reason. At the end of the 80s, there is a guy called MC Solaar who arrives and who breaks everything. We had started to work on a sound that resembled the rhythms of “Caroline”. I wrote a bit like MC Solaar with his poems, which tell a story. (…) So I called Solaar to ask him. He came to Marseille, he wrote and recorded in my studio, in my house. We were there, we were all looking at each other: “It’s a crazy thing”. His voice, it looks like the album of the time! It was on fire, I was really happy. 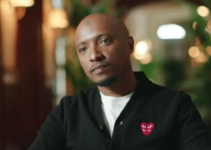